A Selection of My Books 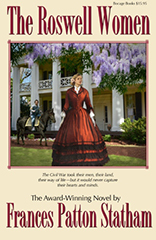 From the pages of American History comes The Roswell Women

As they watched a nation being torn asunder, the women of Roswell, Georgia could hardly stand idle. Left without their men, they ran the Roswell mill to provide a flagging Confederate Army with proud gray uniforms. But their defiance branded them as traitors to the North and they were mercilessly shipped northward in an act decried as brutal by North and South alike.

Allison Forsyth – Beautiful widow of Captain Coin Forsyth, the regal plantation mistress would survive the ravages of imprisonment to find a new love-until a ghost from the past threatened to destroy her hard-won freedom.

Madrigal O’Laney – The fiery redhead lured men from both sides of the war with a promise of love. But the promise had a price and one man thought it was too steep to pay.

Rebecca Smiley – Allison’s servant, she had groomed her mistress for the life of an aristocrat, and the war was not going to spoil her work. She would stop at nothing to see her mistress in her rightful place again.

Flood Tompkins – Disguised as a man, she would survive the war to stake her claim to a fortune, and make a choice that could change Allison’s life forever.

Order The Roswell Women from Amazon.com 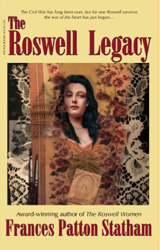 The Roswell Legacy is a story of courage and power, of American history and deep abiding love – all set against the backdrop of Grover Cleveland’s Washington, a capital fraught with politics and greed, where the slightest whisper of scandal could ruin a career…

The Civil War has been over for 25 years, and Allison Forsyth has made a new life. Believing that her beloved husband Coin had died in battle, she has remarried and borne a son-who has grown up and fallen in love with a beautiful young woman named Ginna.

Allison is eager to meet Ginna and her family – but exhilaration is to be short-lived. For soon she discovers that Coin has not died at all, that he too has remarried and begun a new life – that his daughter is none other than the exquisite Ginna.

Two families, two generations of Roswell women, forced to face a tragedy from the past – and a treacherous secret that ultimately becomes… The Roswell Legacy.

Order The Roswell Legacy from Amazon.com 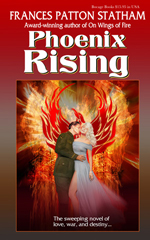 From Atlanta, the city risen from the ashes, to the trenches of France…

Kenna Chalmers, Atlanta’s leading debutante, becomes an army nurse with one thought in mind—to search for her brother who was shot down over France. But before she can leave Atlanta many dangers and surprises await her.

The terror of the chase as an escaped German prisoner of war tries to kill her… the passion of a gypsy who steals her love in a deserted cabin…the secret engagement to an aristocratic officer.

Through it all, Kenna struggles to deny the irresistible passion of Irish Fitzpatrick, the man determined to make her his own. 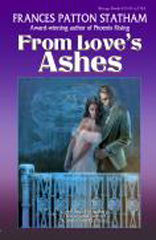 Atlanta between the two world wars –a respectable society exploding into scandal….
Beautiful Steppie Wexford finds her peaceful, happy life suddenly shattered. First, her husband is murdered. Then, her adopted daughter accuses her of killing him! And her family’s honor is threatened by strange financial dealings – a tangled web of hidden relationships and hints of moonshining involvement. In the midst of it all, Steppie discovers a pure and passionate love with Creag Trent. It is a love that can save her. But both Steppie and Creag know that before their exquisite love can truly bloom, the real killer of Steppie’s husband must be found and the honor of her family restored.

Click here to order From Loves Ashes on Amazon.com 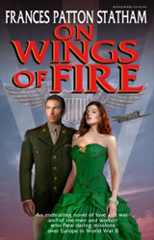 Alpharetta Beaumont – Beautiful and courageous, she found love even more challenging than the dangerous missions she flew as a WASP – a Women’s Airforce Service Pilot…

Ben Mark St. John – He was going to marry Alpharetta until she suddenly broke the engagement…

Sir Dow Pomeroy – For the sake of a mission, Alpharetta posed as his wife – until he began to fall in love with her…

Belline – Lovely and petite, she loved Ben Mark as much as she hated Alpharetta and was determined to have him for herself…

Marsh Wexford – Belline’s stepbrother, a daring paratrooper whose exploits were nothing short of miraculous…

Order On Wings of Fire from Amazon.com 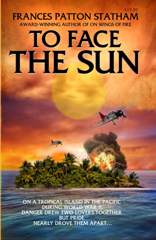 They called her Sunny.

Assigned to the hospital ship Good Hope, Sunny found her work inspiring and challenging—until Alex Ramsay, a British diplomat, arrived on board bloody and unconscious and in need of tender care.

They tried so desperately to scorn each other—the proud young nurse and the haughty, handsome nobleman—little suspecting the hot, war-filled winds of the South Pacific would sweep them together yet again on the largest, sun-soaked island in the Solomons called Guadalcanal.

There with the teeming explosions of war around them, their love blossomed while they faced the dread of an unpromised tomorrow….

Order To Face the Sun from Amazon.com 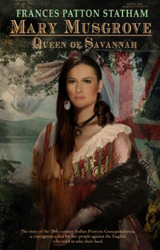 Daughter of an English fur trader and his wilderness wife, young Coosaponakeesa, princess of the Upper and Lower Creeks, left her Indian village for Charlestown to be reared in the ways of the English.

Baptized Mary, the deerskin-clad girl blossomed into a regal beauty, possessing the proud, courageous spirit of her Indian heritage. As wife, mother, and queen, her influence helped forge the greatest trading empire in the Charlestown and Savannah colonies. 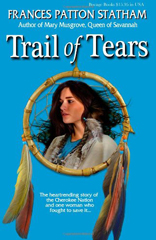 THE CHILD OF TWO WORLDS , SHE WOULD INSPIRE

AND SUSTAIN HER PEOPLE ON A FORCED JOURNEY

Though educated in a white man’s world, Laurel MacDonald, daughter of a powerful Cherokee chief, found fulfillment teaching at the mission school in New Echota, the capital of the Cherokee Nation in Georgia. But her happiness was short lived. The beautiful wilderness nation was now a battleground. The Georgia Militia’s government-sponsored campaign to remove the Cherokee people from their land pitted friend against friend, brother against brother, white man against Indian.

Imprisoned while awaiting their forced migration out west, families were separated. Disease and despair took their toll. Bravely, Laurel and her people faced the devastating hardship that lay ahead on “the trail that cried.” Her heart torn between two men, Edward Faraday, and the other, a young Cherokee chieftain, Night Hawk, Laurel left behind more than memories The history of the Cherokee Nation, its capital, and her teaching had been woven into the very fabric of her life.

But as official interpreter of the Cherokee detachment, she would fulfill her heritage as a Cherokee woman by helping to forge a new nation…

Order Trail of Tears from Amazon.com 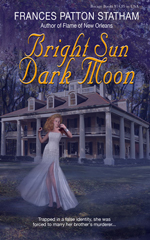 Garth, her handsome, arrogant husband, who had coerced her into marriage;

Evers, the younger brother, who had recently become a man;

Calhoun, their cousin, charming and passionate, who led a secret life.

But not one of them could protect her from the insidious evil that followed her everywhere —stalking her for reasons unknown— waiting for the right moment for murder…. 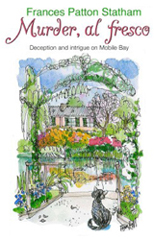 When Love and Murder Collide…

From restoring the gardens on a Mobile Bay estate, turned into an artists’ colony, to being trapped on an offshore island with a murderer, Carley Burnside, a young landscape architect, discovers that things are not always as they seem.

Drawing cards with her identical twin Morgan, for one of two houses in her grandmother’s will, Carley also inherits her poker club, her feng shui housekeeper, two Maltese cats, and disturbing family secrets that threaten her life.

Switched identities, a smuggling ring, eccentric artists, and a wickedly handsome undercover CIA agent have to be dealt with as Carley struggles to survive the hazardous journey from murderous intent to love in a lush coastal paradise. 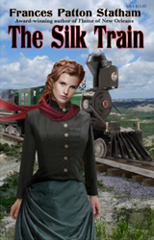 Through mountain wilderness and vast prairies, the Silk Train carried her to a new life…

The Northern Pacific train, with its valuable cargo of raw silk, was a magnet for train robbers. And when it came under attack by outlaws, one of its passengers, noblewoman Anya Fodorsky, made a desperate decision.

Anya’s traveling companion, a gentle schoolmarm, had been killed, and Anya switched their clothes and identities. As Miss Sarah Macauley, she could run from her murderous husband and her gilded, treacherous life… and into Matt Bergen’s empire.

Settled in the Dakota Territory boomtown of Medora, “Sarah” thought she’d found the perfect refuge – until Matt, himself, came too close to unraveling her secrets. There were dangers here on the frontier – and the laws of survival were harsh.

But Anya discovered a golden paradise, where romantic dreams were as boundless as the distant plain…

Order The Silk Train from Amazon.com 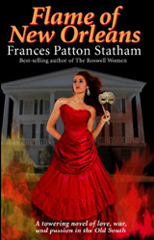 Against the turbulent backdrop of the Civil War, Flame of New Orleans unfolds the dramatic tale of a bold and beautiful Confederate spy who falls in love with a man she hates – a dashing Union officer who saves her life and forces her into an unusual marriage. 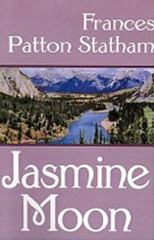 Lili innocently thought her disguise as a servant was a harmless way to find out what the man she married was really like. She didn’t consider that her husband would force her to become his mistress and then sell her as a slave before she could reveal her true identity. Before she can utter a sound, Lili is ripped from her pampered life on a Carolina plantation and forced to begin a dangerous journey that will test her willingness to survive and strength of spirit. In the unfamiliar Canadian wilderness Lili discovers that her passion cannot be tamed. 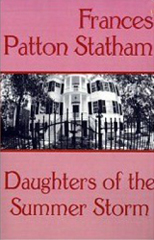 Marigold and Maranta are the beautiful, twin daughters of a privileged plantation family, raised to be gracious and modest. Marigold’s dazzling golden tresses and Maranta’s gorgeous ivory skin and deep dark eyes give the two young sisters a high value in the marriage market, and they find themselves sold into loveless marriages they did not choose. In this spellbinding tale of passion and cruel fate, love will not be held prisoner as Marigold and Maranta fight to be together with the men they truly desire…

Order Daughters of the Summer Storm from Amazon.com